This is one of two games that are epic pirate ship-themed games featuring great thematic elements and puzzles that fit the theme well. Even better, these two rooms are side-by-side, allowing larger groups to divide in half and compete through the puzzles to see which team makes it to the end first! Unlike many competitive rooms which are just mirrored rooms, our competitive rooms are both unique and carefully balanced to allow fair competition AND rematches! "It's June 21st 1655 – a Sunday. You're all new members of the pirate crew of the ship Rat's Nest. Your ship's captain has just led you and the crew on a successful raid that you've been planning for months. Finally with the right planning and a good bit of luck, you have managed to capture a hefty amount of gold fresh off the Portuguese mint. Unfortunately, within sight of your home shore, your ship has been raided by the Royal British Navy. Your Captain has been slain and your fellow crew-members are on the run. The British have been emptying the ship's treasure hold and hunting down every scrap of gold and treasure to be found. Your shares are most likely long gone.
The pirate survivors of the raid are huddled in a room adjacent to the cargo hold, readying a lifeboat to make a run for shore. The pirate who has assumed command orders someone to try to break into the Captain's quarters which should be adjacent to the cargo hold and try to get his [very large] share of the gold. That should be enough to get you all by until you can find a new captain to serve.
Naturally, being the newest crew, that honor falls to you. Being the intelligent pirates that you are, you protest that this is a horrible plan and mention that the British are sure to get there first. Upon hearing your logical and well-presented argument, the rest of the crew picks you up, throws you into the cargo hold and slams the locked door behind you – yelling that they will let you back out once you have the gold."
You can hear the British just on the other side of the wall tearing apart the cannonball-riddled ship looking for the same thing you are.
The plan is simple. Break into the Captain's quarters. Get gold. Get out. Just don't let the British beat you to it...and don't take too long or your mates may get tired of waiting…
Thanks to some convenient destruction caused during the fight, you estimate that you have about an hour before the British can finish searching out and clearing the way to the captain's quarters. Time Limit: 60 minutes Difficulty: 5/10 Group Size: -Min: 2/room -Max: 8/room -Ideal: 4-5/room 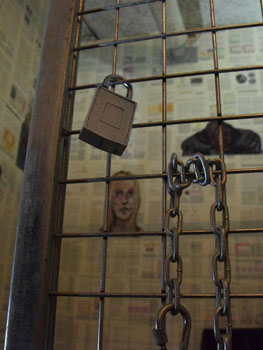